Update 29th June 2011: Seems I for some reason started to see features for Google plus . Google plus is the new social network from google with google circles to allow people to add people to their network, Hangout for video sharing, and sparks to show you content specific to the topics you are interested in.

I was surprised to see quite a few changes for me on google search today, and it seems that not everyone is seeing the same changes as I am, maybe its got to do with me using Chrome, and my preferences. 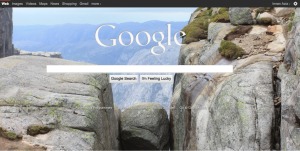 Do I like them? Considering that the background image can be turned on and off for each person its basically up to ones own choice, but as far as the top navigation is concerned I did not chose it to be black, however to me its quite refreshing, as it gives me a much better visibility of the navigation and other options available to me. It surely bring to my attention all the other features that are available within google. I wonder if google is trying to be as agile with its release process as facebook, through which they want to experiment and based on user response decide to keep a specific feature or not.

One thing is for sure, no matter how big you are you are bound to steal clever ideas from competitors, however in this instance googles use of background image is not as clever as bing (What is it? idea). Google doodle is original and works for me.